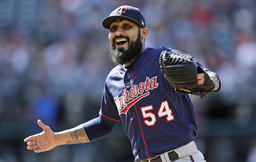 CLEVELAND (AP) Twins manager Rocco Baldelli turned to his bullpen on one of the biggest days of the season.

Five pitchers combined to stop Cleveland's offense, and the Twins widened their lead in the AL Central by defeating the Indians 2-0 in the first game of Saturday's day-night doubleheader.

"It was a gem," Baldelli said. "A tremendous performance from beginning to end. It was an absolutely magnificent performance across the board."

The Twins' bullpen will be asked to do it again in the second game. Baldelli chose to go with a bullpen game in both ends of the doubleheader after Friday night's game was postponed by rain in the third inning.

That strategy worked to perfection in the opener of the showdown series, and Minnesota leads Cleveland by 4 1/2 games.

"I don't think the pressure was on us, but it was a great way to start the series," Baldelli said.

Zack Littell (5-0) relieved starter Devin Smeltzer in the fourth and struck out two in two innings.

Taylor Rogers got the final five outs for his 26th save, but had to work out of trouble in the eighth and ninth.

Jorge Polanco hit a two-run homer in the second off Mike Clevinger (11-3), who had won 10 consecutive decisions. Clevinger struck out 10 in eight innings, but lost for the first time since June 28.

Polanco's 22nd homer of the season landed in front of the bullpens in right-center field.

"I guess I was surprised," Clevinger said. "It was a changeup that didn't seem like it was hit very hard, but the wind was blowing pretty hard that inning. It was a bad pitch, but it was a pretty impressive piece of hitting to get out to the right side of the park and the deep part too."

Polanco's two-run homer Friday got washed away by the rain.

The Twins' shortstop also cut off Cleveland's best scoring threat in the third when he speared Carlos Santana's line drive with the bases loaded to end the inning.

"The home run helped us and the defensive play saved some runs," Polanco said. "I thought I could get it (Santana's liner) once it came off the bat."

Smeltzer retired the first six hitters, but hit Jason Kipnis with a pitch to begin the third. Roberto Perez singled before Smeltzer retired the next two hitters. Oscar Mercado walked and Smeltzer went to a 3-2 count on Santana. Polanco made a diving backhand catch of the liner to end the inning.

Rogers relieved Sergio Romo with a runner on in the eighth and gave up a two-out single to Yasiel Puig, but struck out Greg Allen.

The left-hander retired the first batter in the ninth, but was charged with an error when he didn't pick up Jason Kipnis' slow roller. Rogers struck out Perez and Mike Freeman to end the game.

Minnesota's plan going into the series was to use its bullpen for Saturday's night game. The Indians opted to go with a bullpen game Saturday night after the rainout.

Indians: Perez remained in the game after being hit by Tyler Duffey's pitch in the seventh. The ball deflected off Perez's left arm and hit him in the face. He went to first base after being examined by a team trainer.