A's lose to Angels, lead over Rays down to half-game 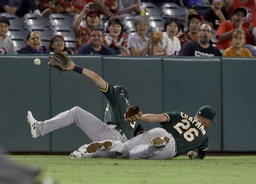 ANAHEIM, Calif. (AP) Athletics manager Bob Melvin knew it was unlikely his team would win every game down the stretch.

The particulars of Oakland's latest loss stung, though, and not just because it left them, Tampa Bay and Cleveland separated by one game in the AL wild-card race.

Homer Bailey lost for the first time in eight starts and the A's suffered a setback in their postseason pursuit, falling to the Los Angeles Angels 3-2 Tuesday night. Oakland let its lead for the top wild card drop to a half-game over Tampa Bay and one game over Cleveland. The A's magic number to clinch a playoff spot remained at five with five games left.

David Fletcher had three hits and Albert Pujols drove in his 2,075th run to help the Angels end a seven-game skid to the A's. Dillon Peters (4-3) allowed two runs in five innings.

Khris Davis hit his 23rd homer of the season, but the A's lost consecutive games for the first time since Aug. 31-Sept. 1.

The Angels scored three runs in the fifth, going in front on Pujols' sacrifice fly to left that drove in Fletcher. However, it was Brian Goodwin's double to tie it at 2 that left Melvin opining on his team's luck.

Goodwin hit a pop fly down the third base line, but left fielder Chad Pinder and third baseman Matt Chapman could not cover the necessary distance in time. The ball dropped in between a diving Chapman and sliding Pinder to allow Matt Thaiss to score.

Fletcher's RBI single got Los Angeles on the board and started the rally.

"The second hit, the bloop was the tough one," Melvin said. "You feel like (Bailey has) got a good chance to at least limit the damage, and Fletcher and Goodwin came up with big hits."

"I wasn't quite as sharp, but I guess if you look at the game collectively we weren't that sharp," Bailey said.

Davis put the A's up 2-0 with his two-run homer to left-center with two outs in the fourth. It was his 156th homer in four years with the A's, tying Miguel Tejada for eighth-most in franchise history.

Hansel Robles got his 23rd save. Mark Canha beat Robles to the base on a ground ball to first to start the ninth inning, but he responded by getting Ramon Laureano to hit into a double play before striking out Davis.

Aside from one bad pitch to Davis, Angels manager Brad Ausmus said the performance by Peters in earning his first win since Aug. 14 showed why the 27-year-old should be in the mix to be a regular starter next season. "When you have the number of injuries we have, there's going to be players that get opportunities, and it's the ones that take advantage of it that can continue to play," Ausmus said.

The Angels claimed 2B Kean Wong, younger brother of Cardinals infielder Kolten Wong, off waivers from the Rays on Tuesday. Kean Wong, a 24-year-old rookie, hit .214 in six games with Tampa Bay.

Athletics: RHP Lou Trivino will miss the rest of the season after cracking a rib falling in the shower. Melvin said Trivino will get a second opinion, but the 27-year-old is unlikely to return for the playoffs should the A's secure a postseason berth. Trivino went 4-6 with a 5.25 ERA in 61 games. ... RHP Blake Treinen (hip and back) will not pitch again this season, Melvin said. Treinen was 6-5 with a 4.91 ERA and 16 saves in 57 games.

Angels: C Max Stassi will undergo hip surgery next week. Ausmus said Stassi, who hit .071 with two RBIs in 20 games for the Angels, will be looking at a 4-6 month recovery. ... RHP Griffin Canning (elbow) was transferred to the 60-day injured list to open up a roster spot for Wong.

A's RHP Frankie Montas (9-2, 2.70 ERA) will start Wednesday following the end of his 80-game suspension for testing positive for a performance-enhancing substance. Montas, who last started on June 20 against Tampa Bay and allowed one run in eight innings, was 5-0 with a 2.54 ERA in his final 10 starts prior to being suspended. The Angels will go with LHP Andrew Heaney (4-6, 5.10), who is 2-2 with a 4.36 ERA in five career appearances against the A's.