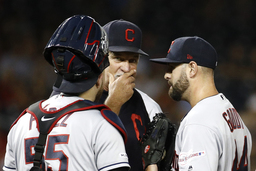 WASHINGTON (AP) The Cleveland Indians' clubhouse was quiet as can be, nearly cleared out. The TVs were all off. No music. No conversation. The meaningful part of their season is done.

Manager Terry Francona and the Indians will miss out on the playoffs for the first time since 2015, eliminated from the AL wild-card race Friday night with an 8-2 loss to the postseason-bound Washington Nationals.

"At some point, I'll talk to our team, because that's what you need to do. It's the one time I never prepare, because I always feel like we're going to figure it out," Francona said. "It's the hardest one, because it hurts so much when you don't get where you want to go, and yet there's still so much that I'm proud of out there that they need to hear that."

Cleveland won the AL Central each of the past three years, but spent most of this season in second place behind the Minnesota Twins, who took over the division lead for good on Aug. 13.

The Indians began the day third in the wild-card standings - behind Oakland and Tampa Bay - and in need of both a victory and some help. They knew they'd be eliminated with the combination of a loss to Washington and a win by the Rays at Toronto. Soon after Cleveland's game ended, Tampa Bay closed out a 6-2 victory.

"We did the best we could, and sometimes things happen, and you've got to accept that and move on," said center fielder Oscar Mercado, who went 0 for 4. "Obviously, we're not going to say we're content, because the ultimate goal here is to win and be in the playoffs. But we just have to accept it and understand that we did the best we could and be able to sleep at night knowing that."

Gerardo Parra had four RBIs to lead the Nationals to their sixth straight victory. The Indians have lost three straight, totaling just two runs and seven hits in the last two, and their loss clinched a wild-card berth for Oakland.

With the Rays getting in, too, both leagues' playoff qualifiers are set, although the matchups aren't.

That's why Washington also had reason to keep an eye on the out-of-town scores posted on Nationals Park's right-field videoboard.

The Nationals clinched a playoff berth Tuesday and will participate in the NL wild-card game next week. What's still undecided, though, is who the Nationals' opponent will be and whether Washington will play at home or on the road. The Milwaukee Brewers dropped two games behind the Nationals in the wild-card race with an 11-7 loss at Colorado.

"Home-field advantage would be great," Nationals catcher Kurt Suzuki said, "but I think we just want to play good baseball going into wherever we play."

Parra broke a 2-all tie for Washington with a sacrifice fly in the sixth off Nick Goody (3-2), and Asdrubal Cabrera followed with a double that added two more runs. Goody was then replaced by Adam Cimber, who promptly served up Trea Turner's 19th homer of the year, a two-run shot to left that made it 7-2.

Parra also hit two-run double off Zach Plesac in the second, and a solo homer off Dan Otero in the eighth to back Austin Voth (2-1), who went six innings for the victory.

Indians: 3B Jose Ramirez was out of the lineup with a sore right hand; he recently returned from being out with a fracture.

Nationals: Suzuki made his first start since Sept. 5, limited since then to pinch-hitting duty because of a sore right arm. Suzuki played nine innings and went 1 for 3 with a walk and two runs scored.