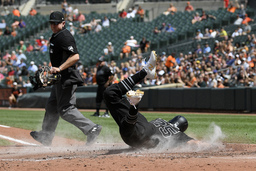 BALTIMORE (AP) The Tampa Bay Rays can only hope that a lost weekend in Baltimore doesn't prove costly in their bid to end a five-year playoff drought.

Anthony Santander went 5 for 5 with a homer , Renato Nunez drove in three runs and the Orioles beat the Rays 8-3 Sunday for a split of the four-game series.

After beating Baltimore twice to move atop the AL wild-card standings, Tampa Bay was outscored 15-4 by the team with the second-worst record in the majors.

"Disappointing," Rays outfielder Kevin Kiermaier said. "We started out great, two wins, but the last two days were a letdown. They outpiched us and outhit us. They did everything right."

Kiermaier hurt his ribs chasing down one of Baltimore's 16 hits and was pulled from the game as a precaution. The injury did not hinder his ability to access where the Rays stand with 30 games to play.

"We're trying to figure out how we're going to be better across the board. We're searching for those answers right now," he said. "We're very inconsistent. We'll rattle off four wins in a row then lose three or four."

Rays opener Diego Castillo (2-7) gave up one run over two innings before Jalen Beeks was roughed up for seven runs and 11 hits in five innings.

"They saw the ball well," Tampa Bay manager Kevin Cash said of the Orioles. "They were prepared and ready to hit."

Santander had his first career five-hit game, Jonathan Villar homered , and DJ Stewart and Nunez each had three hits.

"We lost the first couple games, so to be able to come back and get a split is fantastic," Orioles manager Brandon Hyde said. "That's a really good ballclub, a team that's going to be in until the very end."

Nunez singled in a first-inning run and hit a two-run double in the third before scoring on a single by Stewart for a 4-0 lead.

Tampa Bay answered with an unearned run in the fourth and loaded the bases with one out before Dylan Bundy (6-13) got Joey Wendle to bounce into a double play, one of four turned by the Orioles.

"That's all you try to do as a starter is limit the damage, and we had some great defensive plays today," said Bundy, who allowed two earned runs in five innings.

Villar homered in the bottom half and Santander added an RBI single to make it 6-1.

With 28 steals along with his career-high 20 home runs, Villar has the eighth 20-20 season in Orioles history - the first since Manny Machado in 2015.

Orioles pitching coach Doug Brocail was ejected by first base umpire John Bacon, who ruled that a check-swing by Avisail Garcia in the fifth inning was not a strike. Brocail thought otherwise and was tossed for the second time this season.

Rays: LHP Jose Alvarado was placed on the 10-day injured list with elbow inflammation following an ineffective, abbreviated outing Saturday night. "He was fine during the game," Cash said. "I think his elbow flared up once he was off the mound." Alvarado will be examined Monday in Florida. ... Wendle (right wrist inflammation) was activated from the IL and started at third base. "Definitely having an up and down season - mostly down," said Wendle, who came in with a .206 batting average over 46 games after hitting .300 in 139 games last year. He's been on the IL three times, twice with a sore wrist, and will be used sporadically until it's certain his wrist is close to 100 percent.

Orioles: 3B Hanser Alberto was removed from the game after being struck in the head by Eric Sogard's knee on a play at second base. Hyde said Alberto has a head contusion and a cervical neck strain. ... LHP John Means was placed on the family medical emergency list. He pitched Saturday night, and the Orioles hope to have him back for their upcoming weekend series in Kansas City. RHP Tayler Scott was recalled from Triple-A Norfolk.

Orioles: A day off Monday is followed by a two-game road series against the Washington Nationals, an NL contender. The neighboring teams split two games in Baltimore last month.