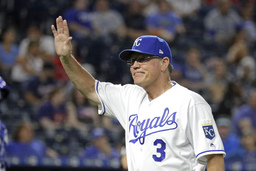 In Kansas City's first game after Yost announced he will retire after the season, the lowly Royals burst to a six-run lead in the first three innings and beat the NL East champion Atlanta Braves 9-6 Tuesday night behind three hits and two RBIs from Nicky Lopez.

Yost, who turned 65 last month, was hired by the Royals in May 2010 and led Kansas City to consecutive AL pennants and the 2015 World Series title, the second in team history and first since 1985. The Royals are 58-100 in their third straight losing season.

"We want to send him out on as high a note as possible," winning pitcher Danny Duffy said. "The season hasn't gone the way we wanted and he deserves to go out on a better note."

Atlanta, assured it will start the NL Division Series at home on Oct. 3, is 96-62. The Braves need to win all four of their remaining games to reach 100 victories for first time since 2003.

Duffy (7-6) gave up three runs and five hits in five innings, improving to 3-1 in his last seven starts.

"I was telling the boys, my fastball command all day was yard sale. It wasn't there. It was all over the map," Duffy said.

"What more can you ask of a leadoff hitter?" Yost said. "It was like a 13-pitch at-bat and a double. It was a phenomenal at-bat and it was a great way to start the ballgame."

"I think from there I knew that it was going to be a tough one," Teheran said,

Hunter Dozier hit a sacrifice fly to score Merrifield in the first, and the Royals broke open the game with a five-run third that included Alex Gordon's RBI single, Ryan O'Hearn's sacrifice fly and a two-run double by Bubba Starling, who went to third on the throw home and scored when catcher Brian McCann's throw to third went into left field for an error.

"I'm enjoying the game. I kind of lost sight of that when I was struggling," Lopez said. "I just went back to the basics and having fun."

Francisco Cervelli and Ozzie Albies homered for the Braves.

Atlanta center fielder Ronald Acuna Jr. was removed after two innings as a precaution because of left hip tightness. Acuna leads the Braves with 41 homers and is three steals shy of 40.

"I'd been feeling it before. But I'm a warrior," Acuna said. "I'm going to keep playing through these types of things. That's just the way I am."

Braves OF Ender Inciarte, out since Aug. 10 with a right hamstring strain, is expected to test his leg by running the bases Wednesday.

The Braves switched to RHP Josh Tomlin (2-1, 3.82 ERA) as Wednesday night's starter, deciding instead to give Mike Soroka a break and start him Sunday at the New York Mets. LHP Mike Montgomery (3-9, 5.00 ERA) will start the finale of the two-game series for the Royals.