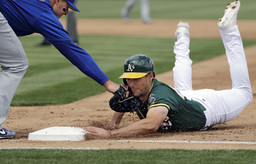 OAKLAND, Calif. (AP) Athletics first baseman Matt Olson underwent surgery on his right hand Friday after getting injured on a foul tip in his final at-bat during Thursday's 5-4, 12-inning loss to the Mariners in Tokyo.

Olson's procedure was performed by Dr. Steven Shin at the Kerlan-Jobe Clinic in Los Angeles. The team said the operation involved a right hamate excision. No timeline for his recovery was provided.

The Gold Glove first baseman played all 162 games last season as the A's returned to the playoffs for the first time since 2014.