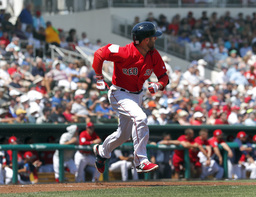 MESA, Ariz. (AP) Steve Pearce will start the season on the injured list for the Boston Red Sox.

The 2018 World Series MVP exited an exhibition game last weekend due to discomfort in his left calf. Pearce, a right-handed batter, normally platoons with lefty-hitting Mitch Moreland at first base. But the Red Sox will begin defense of their championship Thursday in Seattle without Pearce.

"We have to do it that way," manager Alex Cora said Monday night. "It makes sense for us, it makes sense for him. He should be back sooner rather than later but he won't be ready for Seattle, so why take a chance?"

Sam Travis will likely make the team and take Pearce's spot on the opening-day roster.

"He's been swinging the bat, he plays first, he's a right-handed hitter," Cora said. "It seems like we're going to face a lot of lefties on the West Coast. Having a right-handed bat would help us out."

Pearce became a free agent and re-signed with Boston for one year and $6.25 million.

Boston nearly lost another player to a much more serious injury when pitcher Rick Porcello was hit in the head by a line drive during Monday night's 3-2 exhibition loss to the Chicago Cubs.

Willson Contreras hit a liner that deflected off Porcello's head in the second inning. Porcello, however, was checked by an athletic trainer, threw a few warmup pitches and stayed in the game.

Cora was doubtful at first about keeping Porcello in the game. The right-hander told the trainer to touch his head where the ball hit him.

"He barked like a dog and scared the living whatever out of me," said Cora, who jumped off the mound. "I told him, `Now I'm going to be on TV for the rest of my career for the wrong reasons.'"

Porcello was able to laugh about the play after his outing.

"It ricocheted," he said. "I got up, I felt fine, I wasn't wobbly or dizzy or anything like that. I was fine."

In his final tuneup for the regular season, Porcello gave up two runs and four hits over four innings, including a solo homer to opposing pitcher Cole Hamels in the third.

"He's tough," Hamels said. "I don't know where it hit him. We don't have instant replay - and I'm glad we don't so we didn't have to relive it. He looked fine when he was coming off."

In other news, Red Sox second baseman Dustin Pedroia will start Tuesday in the spring training finale against the Cubs. Pedroia was limited to three games last season after undergoing a microfracture procedure and cartilage replacement in his left knee in October 2017.

The 35-year-old Pedroia hosted Red Sox players and coaches Sunday night at his home in the Phoenix area.

"He's in a good place," Cora said. "I was joking with him because for that kid who played in Anaheim, in his first big league game in 2006, I still remember he was 5-6, chubby. He hates that I say that but he was. To see the house he has, I'm like, `Wow. You did well, bro. What a story, you should write a book.' It was amazing. Obviously, in this environment, you go to some nice houses. They should do that show again - `Cribs' - and go to Pedroia's."

How important would it be for the Red Sox to get a healthy Pedroia back?

"It's good," Cora said. "Forget the player - for him to be happy, that's the most important thing. Last year, he was great for us in the clubhouse, he was a leader, he was another coach. He still can play. You see him on a daily basis and he's smiling a little more, he's talking again, he's loud. When he's loud, he's in a good place. We're very happy with the progression.

"Whenever he comes back, I know he's going to contribute," Cora said. "We can't get too excited. We have to be patient. We have to be disciplined with this."

NOTES: The Red Sox plan to set the order of their rotation after David Price's exhibition start Tuesday against the Cubs. Price might pitch one inning and that could be enough, Cora said. "He feels good right now," the manager added. "If he feels like pitching one inning tomorrow is enough. That means he'll probably pitch in Seattle early."