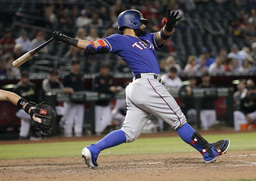 Texas announced the move Saturday, a day after Odor was a last-minute scratch from the starting lineup for the series opener against Oakland. Odor is expected to be re-evaluated in about two weeks.

Odor batted .167 with no homers and two RBIs in his 12 games this season.

Santana has appeared in the big leagues each of the past five seasons, hitting .256 with 13 home runs and 100 RBIs over 364 games with Minnesota and Atlanta.