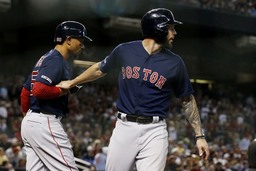 The teams announced the deal Friday.

Swihart was designated for assignment Tuesday. He is 6 for 26 (.231) with one home run and four RBIs in 12 games this season, making all six of his starts at catcher. He has also played at first base and left field.

Diamondbacks general manager Mike Hazen worked in player development and amateur scouting with Boston when Swihart was selected in the first round of the 2011 draft. The 27-year-old became one of the club's top prospects, but his offensive production hasn't matched the hype.