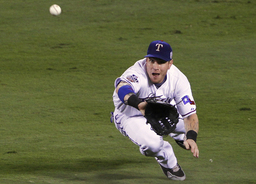 ARLINGTON, Texas (AP) Josh Hamilton hasn't really thought much about baseball since knee issues ended his career, though he does miss playing at times. The 2010 AL MVP's moments on the diamond these days are watching and sometimes coaching his daughters playing softball.

"I've been making up for lost time with my girls, being Dad. Got a ranch towards College Station, spending time there," Hamilton said Monday, after the Texas Rangers said he would be inducted into the team's Hall of Fame. "Hadn't really thought much of baseball. It's one of things where I never cared too much about watching the game, but I loved playing it more than anything."

Hamilton, who turns 38 on Tuesday, hasn't been to a Rangers game since playing in their 2015 regular season finale, though he went to spring training with the team the next two years after that.

Former Arlington Mayor Richard Greene, who during his tenure from 1987-97 played a major role in a getting the team a new stadium then and keeping the Rangers in Arlington, will join Hamilton in being inducted into the Texas hall in ceremony before an Aug. 17 against Minnesota.

"It's a great honor. If I were to think about, 15 or 20 years ago, if I'd be in any Hall of Fame at this point in my life, I'd have said no," Hamilton said. "So obviously, I gotta thank the good Lord above, and the Rangers where I had the best years of my career. And all the fans. It's just very humbling ... Thinking about good memories, good times in my life, and times where the Rangers stuck with me through some things and took a chance on me in other areas."

After Hamilton was the first overall pick out of high school in the 1999 amateur draft by Tampa Bay, his career was nearly destroyed by cocaine and alcohol addiction. He returned to baseball with Cincinnati and made his big league debut in 2007, when he hit 19 homers in 90 games before getting traded to the Rangers. He was part of their only two World Series teams (2010 and 2011) and was an All-Star five seasons in a row.

There was that awe-inspiring display in the Home Run Derby at Yankee Stadium in 2008, when the first-time All-Star led the American League with 130 RBIs while hitting .304 with 32 homers in his first full season.

Hamilton left the Rangers in free agency, signing a $125 million, five-year deal with the Los Angeles Angels before the 2013 season. He was recovering from shoulder surgery when the Angels traded him back to Texas in 2015 after his two injury-plagued seasons with Los Angeles. He played 50 games for Texas in 2015, but never again after surgery on his left knee at least three times after that.

"The only thing I regret is not being able to be healthy when I came back to Texas," he said. "If I look back and could wish something, it was that right there, if I could have been healthy in `16 and `17 and finish playing like I wanted to play."

The former slugger said there are times if he sees a game that he gets a feeling that he could probably still play, at least as a designated hitter.

"There's a feeling still inside of me that comes boiling up," he said.

He never officially announced his retirement, saying he wanted to "just slip off into the background" once he was ready to get to the ranch, get on a tractor and be a dad. He said he is enjoying life.

"I'd be lying to you if I said I still didn't feel like I could get out there and play," he said. "Then I remember why I quit. Just to be there for my girls."