Cubs get catcher Maldonado from Royals for LHP Montgomery 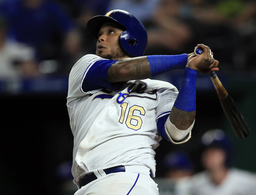 CHICAGO (AP) With their All-Star catcher sidelined, the Chicago Cubs quickly found some experienced help behind the plate.

The NL Central leaders acquired Martin Maldonado in a trade with Kansas City on Monday night that sent left-hander Mike Montgomery to the Royals.

Cubs president of baseball operations Theo Epstein announced the deal following Chicago's 6-3 loss to Cincinnati - adding that top catcher Willson Contreras was going on the 10-day injured list with a strain to the arch area of his right foot.

The 32-year-old Maldonado, a Gold Glove winner in 2017 with the Angels, was batting .227 with six homers and 17 RBIs in 74 games for the struggling Royals this season. The Cubs will be his fifth team in nine major league seasons, and Epstein expects him to provide a strong defensive presence.

"He can really receive," Epstein said. "He can really throw. He's caught playoff games. He's handled some of the best pitchers in the game. He's a favorite of pitchers to throw to. He calls a great game."

Contreras' injury initially was not deemed serious and he was expected to start Tuesday, but an MRI showed enough damage to warrant shutting down the 27-year-old. Epstein said Contreras should improve quickly with rest and the club hopes he'll be ready to play once eligible to return from a backdated stint on the IL.

"Our medical staff feels like if he were to try to play on it, that he'd be risking exacerbating the injury and turning it into something long term," Epstein said. "So we have to get ahead of it, take it out of Willie's hands and get him off his feet."

The Cubs, holding a slim lead in their crowded division, weren't sure if Maldonado would arrive at Wrigley Field in time for Tuesday night's game against the Reds. He was pulled by the Royals from Monday night's home game against the Chicago White Sox for a pinch-hitter, backup catcher Cam Gallagher, in the sixth inning.

Montgomery got the final out in Game 7 of the 2016 World Series at Cleveland, ending the Cubs' 108-year championship drought.

"You can't talk about his contributions without talking about him getting the last out in that World Series that changed everybody's lives," Epstein said. "Beyond that, I thought he started coming into his own."

Montgomery is expected to get a chance to start with the Royals, who drafted him in 2008. He was traded to Tampa Bay four years later with Wil Myers and Jake Odorizzi, and made his big league debut with Seattle in 2015.

The deal with the Rays involving Montgomery was one of the most significant in Royals history because it netted pitchers James Shields and Wade Davis.

Shields won 27 games over two strong seasons with the Royals and helped them capture the 2014 AL pennant. Davis blossomed into a lights-out reliever in Kansas City and was a critical member of the 2015 World Series championship team.

Royals general manager Dayton Moore said the club intends to use Montgomery in the rotation as a replacement for Homer Bailey, who was dealt to Oakland on Sunday.

"He clearly wants to start," Moore said about Montgomery. "He's kind of been used in a very versatile role over there. He's pitched in the middle, he's pitched situational - it's just a good opportunity to get him back and put him in the rotation.

"We're going to have to stretch him out," the GM added, "but the plan is for him to start on Friday (at Cleveland). Once we get him here and talk to him and analyze it a little more, we'll figure out how many pitches he goes."

Moore said catcher Meibrys Viloria will be called up from Double-A Northwest Arkansas to replace Maldonado on the roster. Viloria is batting .264 in 63 games.

Moore appreciated the effort this year from Maldonado, signed to a $2.5 million, one-year contract as a free agent to take over the starting job from injured All-Star Salvador Perez, who is sidelined for the entire season.

"We can't say enough about how he competed, the tone he set for our pitching staff, the way he studies, the way he prepares," Moore said. "He's played some of his best baseball here the last month."