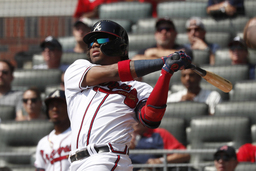 ATLANTA (AP) Ronald Acuna Jr. of the Atlanta Braves has become only the third player in baseball history to hit 40 homers while 21 years old or younger.

The other two were Eddie Mathews and Mel Ott, who are both in the Hall of Fame.

The 21-year-old Acuna launched a two-run shot Thursday in the third inning, a towering 432-foot drive into the second level at SunTrust Park off Philadelphia's Aaron Nola.

With eight games left in the regular season, Acuna also has a shot at becoming just the fifth player in baseball history to hit 40 homers and steal 40 bases in a season. He has 37 stolen bases.