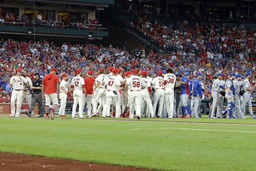 Molina was awarded first base in the second inning after Hamels' 91 mph pitch clipped his left arm. He took a few steps toward first and stared at Hamels, then began barking at him and walked toward the mound. Cubs catcher Jonathan Lucroy stepped between Molina and Hamels while they jawed, and St. Louis teammate Matt Carpenter dragged Molina away while players poured onto the field.

No punches were thrown and no warnings or ejections issued following the standoff.

Plate umpire and crew chief Fieldin Culbreth had an extended conversation with Cardinals starter Adam Wainwright before he took the mound to start the third inning.

St. Louis entered play one game ahead of the Milwaukee Brewers in the NL Central with two games remaining. Chicago was eliminated from postseason play Monday, one day after the Cardinals swept a four-game series from the Cubs at Wrigley Field.