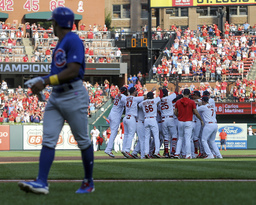 ST. LOUIS (AP) A videographer who collapsed from a heart attack in the visiting dugout at Busch Stadium is alive, thanks in part to a St. Louis Post-Dispatch journalist.

The videographer, 64-year-old Mike Flanary, was in the Chicago Cubs' dugout Sunday before the game the Cardinals eventually won 9-0 to clinch the National League Central title.

Flanary collapsed and was briefly without a pulse. The Post-Dispatch reports that baseball writer Derrick Goold had CPR training as a youth and rushed to help. The Cubs' training staff and EMTs performed further medical procedures before Flanary was taken to a hospital.

Flanary was in critical but stable condition. He had suffered a heart attack and a stroke.