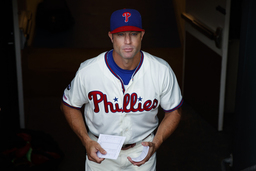 PHILADELPHIA (AP) Gabe Kapler wants the opportunity to lead the Philadelphia Phillies back to the postseason after consecutive collapses in September.

It's still uncertain whether he'll get another chance.

A season that began with high expectations following the arrival of Bryce Harper and other high-profile players ended the same as the previous seven years: without October baseball.

The Phillies finished 81-81, a one game improvement from Kapler's rookie season as manager. Frustrated fans want to see change but management hasn't announced a decision either way.

"I love managing that group of players," Kapler said after the season ended Sunday. "I love working with that staff. I love working with this front office. They give me all sorts of autonomy. I have felt supported by our ownership group. Our ownership group has done everything in their power to put a winning product on the field. I'm proud to be a Philadelphia Phillie and will do it as long as I'm able."

The Phillies were only two games behind in the NL wild-card standings after beating the Braves on Sept. 18 but lost eight of the next nine, including a five-game sweep at Washington. They finished eight games behind Milwaukee for the second wild card and 16 behind first-place Atlanta in the NL East.

Last year, the Phillies had a one-game lead in the division on Aug. 11 before going 15-31 the rest of the way.

Injuries were a big reason why Philadelphia failed to deliver a winning record for the first time since 2011. It lost leadoff hitter Andrew McCutchen for the season in June and six of its top seven relievers missed significant time. Free-agent addition David Robertson pitched just 6 2/3 innings and Pat Neshek and Tommy Hunter threw a combined 23 innings.

Despite adding Harper, McCutchen, J.T. Realmuto and Jean Segura, the offense was inconsistent and the Phillies couldn't string together more than four victories in a row. Hitting coach John Mallee was fired and replaced by former manager Charlie Manuel in August. The Phillies improved but couldn't overcome poor pitching.

The starting rotation struggled throughout the season and the injury-depleted bullpen was filled with minor leaguers and castoffs.

"My job has always been and will always be to take the collection of individuals I have to work with and make that situation the best I possibly can," Kapler said.

Here's a closer look at what went right and wrong for the 2019 Phillies:

HARPER THE HERO: Harper lived up to his $330 million, 13-year contract that was briefly the richest ever in baseball. He slumped in the first half but finished with a .260 batting average, 35 homers and a career-best 114 RBIs. Harper was an instant fan favorite and a hit at the box office. He also gave Kapler his support, saying: "It hasn't been his fault."

ROTATION WOES: Ace Aaron Nola (12-7, 3.87 ERA) wasn't as good as he was last season, when he finished third in NL Cy Young Award voting. Jake Arrieta (8-8, 4.64) needed season-ending elbow surgery. Zach Eflin (10-13, 4.13) finished strong. Nick Pivetta was demoted to the minors and moved to the bullpen. Vince Velasquez's best moment came as a left fielder when he threw a runner out at the plate and made a sliding catch. The team's failure to upgrade the rotation was its biggest problem. It needs to add at least two starters in the offseason.

REAL DEAL REALMUTO: Realmuto was the team's lone All-Star and lived up to expectations as the best catcher in baseball. He hit .275 with career highs in homers (25) and RBIs (83) and is expected to win a Gold Glove Award after throwing out 43 runners to lead the majors.