Rangers working to lay foundation for success in new park 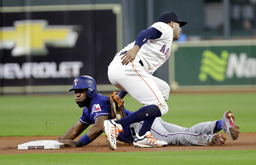 ARLINGTON, Texas (AP) Elvis Andrus and the Texas Rangers have left the building, the ballpark the team called home for 26 seasons.

While their new stadium with a retractable roof is still being built across the street, the Rangers wrapped up their first season with manager Chris Woodward confident that a solid foundation is being laid in place for success in the future on that new field.

While the Rangers finished with their third consecutive losing season at 78-84, that was an 11-win improvement over 2018.

There was a full season of building relationships and trust between the players and Woodward, who as a utility player saw action at every position but catcher and pitcher during parts of 12 seasons with five teams and 11 different managers.

"He knows all of the different roles of being a major leaguer. I think that's the biggest thing, he's understanding, he just brings positivity every day, no matter what," said young slugger Joey Gallo, a first-time All-Star before his season ended in late July because of a broken bone in his hand. "I couldn't be happier to have him as our manager. I think we're in a really good spot for the future."

The Rangers were 10 games over .500 the last weekend of June, at the time tied with Tampa Bay for the AL wild card lead.

After workhorse starters Mike Minor and Lance Lynn on the mound, there were all those young pitchers - 13 rookies got in games, including some hard-throwing relievers.

"With the new coaching staff and new manager, you saw guys starting to take a step," Lynn said. "We've just got to keep doing that, keep doing that in the offseason, and everybody's got to buy in. If we do that, we're going to be all right."

TOP OF THE ROTATION

Minor (14-10) and Lynn (16-11) each pitched 208 1-3 innings, career highs for both. Only six pitchers in the majors threw more this season. Lynn's 10 strikeouts in a season-ending win over the AL East champion New York Yankees gave him 246, while Minor finished with 200 after a bit of controversy to get his last one. The last Rangers duo with 200 innings and 200 strikeouts in the same season were Nolan Ryan and Bobby Witt in 1990.

Texas went into this season with three other starters coming back from Tommy John surgery with other teams. Drew Smyly and Shelby Miller struggled and were both designated for assignment by July 1. Edinson Volquez missed most of the season with elbow issues after his first two starts, but the 36-year-old right-hander returned to pitch in the final month with his final team and plans to retire.

Rougned Odor led the team with career highs of 30 home runs and 93 RBIs, but his .205 batting average was the lowest among the 135 major league qualifiers. He was hitting .185 a week into his fifth season, and didn't go back over .200 until after the All-Star break, peaking at .212. The 25-year-old second baseman is owed $36 million over the next three years.

Woodward was the third base coach for the Los Angeles Dodgers the previous three seasons, with the last game each of the past two years being in the World Series. They went to the NL Championship Series in 2016.

"It's going to be weird watching," Woodward said. "I never took it for granted. ... You know how hard it is."

The Rangers led the majors in stolen bases for the first time with 131. ... Andrus' 31 stolen bases made him the first Texas player with more than 300 in his career. Now 30, Andrus is the longest-tenured Rangers player after 11 seasons, and only one remaining from their back-to-back World Series appearances (2010 and 2011).