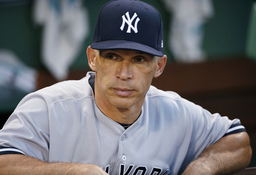 CHICAGO (AP) Former Chicago Cubs catchers Joe Girardi and David Ross will speak with the team next week about its managerial opening.

The team also plans to interview first base coach Will Venable next week. Bench coach Mark Loretta interviewed for the job Thursday.

The Cubs are searching for a successor to Joe Maddon, whose contract expired after Chicago missed the playoffs this year for the first time since 2014.

Girardi is the first external candidate confirmed by the team. Loretta and Venable were part of Maddon's staff this season, and Ross works in the Cubs' front office.

Girardi, who turns 55 on Oct. 14, is a Peoria, Illinois, native and played college ball at Northwestern.

Ross spent the last two of his 15 major league seasons with the Cubs, winning the World Series in 2016. He still has strong ties to several players on the team.