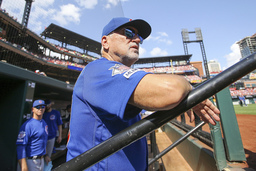 ANAHEIM, Calif. (AP) Joe Maddon will interview for the Los Angeles Angels' managerial vacancy this week, a person familiar with the process told The Associated Press,

The person spoke on condition of anonymity Sunday because the Angels aren't publicizing their search. ESPN first reported the interview.

Maddon is considered the prohibitive front-runner to replace Brad Ausmus, who was fired after one season in charge. The Angels finished 72-90, their worst record since 1999.

Maddon spent 31 years employed by the Angels as a player and a coach throughout the organization. He was Mike Scioscia's bench coach with the 2002 World Series champions before leaving for managerial jobs in Tampa Bay and Chicago, where he won the World Series in 2016. He was let go by Chicago on the final day of the regular season.

Despite the Cubs' post-championship disappointments over the past three years, Maddon remains regarded as one of baseball's top managers. His teams have made eight playoff appearances, including four straight in Chicago before this season's 84-win team finished third in the NL Central.

Maddon worked under five managers with the Angels, and he served two stints as the club's interim manager. He was there for the disappointing seasons of the 1990s, and he was at Scioscia's side in the 2000s during their growth into a perennial playoff team that won the franchise's only championship.

Now 65, Maddon kept a home in the Los Angeles area during his 14 years away from the Angels. He was on Los Angeles' bench when owner Arte Moreno bought the Angels in 2003, and the two have a cordial relationship.

Ausmus was fired one year after replacing Scioscia, who spent 19 seasons on the Angels' bench. Los Angeles has had four consecutive losing seasons for the first time since the 1970s, and the Angels have yet to win a playoff game with Mike Trout or Albert Pujols in their high-priced lineup.

Angels general manager Billy Eppler vowed to hold a comprehensive search for a new manager after firing Ausmus, insisting the Angels hadn't already decided on a successor despite the franchise's clear ties to Maddon.