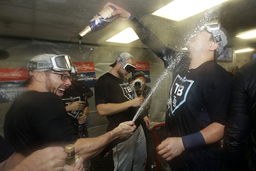 HOUSTON (AP) Eric Sogard homered in the first at-bat of his first start this postseason for Tampa Bay, going deep in the decisive Game 5 of the AL Division Series at Houston on Thursday night.

The second baseman batted fifth against Astros starter Gerrit Cole, who struck out 15 over 7 2-3 scoreless innings when the Astros won Game 2 to take a 2-0 series lead before the Rays won twice at home.

"You've got Gerrit, who is probably the highest strikeout pitcher in baseball. We value Eric Sogard as a very high contact-oriented hitter," manager Kevin Cash said.

The Rays were already down 4-0 when Sogard homered on the first pitch of the second inning.

In his only appearance this postseason before the ALDS finale, Sogard had a RBI single as a pinch-hitter in Game 1 on Friday.

Brandon Lowe started the first four ALDS games for the Rays at second base and was 4 for 16 with eight strikeouts. The rookie had the only hit off Justin Verlander in the series opener, but also had an error that game that led to two unearned runs.

Sogard's last start and last game at second base was Sept. 14, the day before he was a pinch-hitter in his final appearance of the regular season.

Cash said the only concern about Sogard would be how he responded to being on his feet throughout the game. But the manager described Sogard as confident and really excited to be back in the lineup.

"I feel good. Obviously the extra rest time has helped me a lot," Sogard said. "I'm confident out there I'll be able to do as much as I normally do."