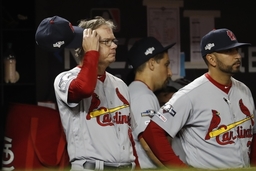 WASHINGTON (AP) St. Louis Cardinals manager Mike Shildt has benched Dexter Fowler and made several other changes to his slumping lineup for Game 4 of the NL Championship Series against the Washington Nationals.

The Cardinals enter Tuesday night's game having scored a grand total of two runs and managed just 11 hits while falling into a 3-0 hole in the best-of-seven series.

Going with a lineup he has not used all season, Shildt dropped Fowler - who is 0 for 11 in the NLCS and 2 for 33 this postseason - and put Harrison Bader in center field.

Fowler's place in the leadoff spot is being taken by Tommy Edman, who moved up from No. 7 in the order. Jose Martinez was bumped to No. 2 from No. 5, where he started in the Cardinals' 8-1 loss in Game 3 on Monday.

There are other shifts to the order, with only two spots unchanged: Paul Goldschmidt at No. 3, and Marcell Ozuna in the cleanup spot.