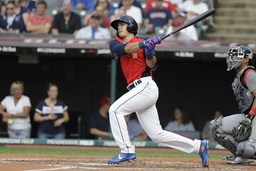 SEATTLE (AP) The Mariners are locking up Evan White for the future before he ever plays a major league game.

Seattle and White have reached agreement on a $24 million, six-year contract, according to a person with knowledge of the deal. The person spoke to The Associated Press on Friday on the condition of anonymity because the deal had not been announced. The contract is expected to be finalized sometime next week. MLB.com first reported the agreement.

The 23-year-old White was the 17th overall pick in the 2017 amateur draft out of Kentucky. From the time he joined the Mariners system he's been regarded as the club's first baseman of the future because of his excellent defense in the field and a solid bat at the plate.

White joins the likes of Philadelphia's Scott Kingery and the Chicago White Sox Eloy Jimenez, who signed long-term deals with their teams before ever making it to the majors. What makes White unique is he has yet to play above Double-A, yet Seattle is showing how much it believes in White's potential by making this commitment.

White should have a chance to earn the starting job at first base during spring training as the Mariners used eight different players at first last year. Austin Nola and Daniel Vogelbach had the most games there, but Seattle thinks White is a better defender.

While White's defense has been highly regarded, his bat isn't bad, either. He hit .293 with 18 homers and 55 RBIs at Double-A Arkansas last season. In parts of three seasons in the minors, White has hit .296 with an .832 OPS.