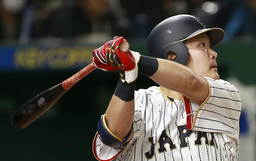 ST. PETERSBURG, Fla. (AP) The Tampa Bay Rays are working to finalize a two-year contract worth about $12 million with Japanese slugger Yoshitomo Tsutsugo, a person familiar with the negotiations told The Associated Press.

The person spoke on condition of anonymity Friday because the agreement had not been announced.

Tsutsugo was made available to major league teams through the posting process by Yokohama of Japan's Central League. Major league clubs have until 19 to negotiate with Tsutsugo, who turns 28 on Nov. 26. A contract for $12 million guaranteed would require the Rays to pay a $2.4 million posting fee to Yomiuri.

Tampa Bay, which came within one win of reaching the AL Championship Series this year, traded outfielder Tommy Pham to San Diego for outfielder Hunter Renfroe as part of a five-player deal last week. Pham hit .273 with 21 home runs and 68 RBIs last year.

Renfroe hit 33 homers last year, his third full season in San Diego, but struggled with injuries during the second half.