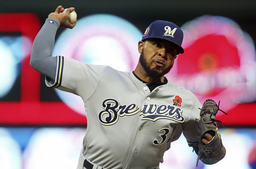 Jeffress' contract is worth $850,000, and the 32-year-old right-hander can earn an additional $200,000 in incentives. A person with direct knowledge of the situation confirmed the deal Tuesday on condition of anonymity because the move had not been announced.

Souza finalized a $1 million deal that includes the possibility of $2 million in bonuses based on plate appearances and days on the active roster.

Chicago has been unusually quiet this winter after missing the playoffs last year for the first time since 2014. But the Cubs agreed to a minor league deal with Brandon Morrow in December, bringing back the closer after he missed last season while he struggled to return from right elbow surgery.

Jeffress was one of baseball's most dominant relievers in 2018, making the All-Star team for the first time while going 8-1 with a 1.29 ERA and 15 saves for Milwaukee. He made a career-high 73 appearances for the NL Central champions and then pitched in eight games in the playoffs.

Jeffress was slowed by right shoulder weakness during spring training last year. He also spent time on the injured list with a strained left hip before he was cut by the Brewers on Sept. 1.

Souza sustained serious injuries during spring training in each of the previous two years. He tore his right pectoral muscle in 2018 and missed about eight weeks of the regular season. He tore multiple ligaments in his left knee during an exhibition game last March, sidelining him for the year.

The 30-year-old Souza hit .239 with 30 homers, 78 RBIs and 16 steals for Tampa Bay in 2017 before he was acquired by Arizona in a three-team trade. He became a free agent in December when the Diamondbacks declined to offer him a 2020 contract.

Souza made his his major league debut in 2014 with Washington. He is a .233 hitter with 70 homers and 198 RBIs in 471 career games with the Nationals, Rays and Diamondbacks.

Jeffress was selected by Milwaukee in the first round of the 2006 amateur draft and made his big league debut with the Brewers in 2010. He is 28-11 with a 3.16 ERA in 392 career games with Milwaukee, Texas, Kansas City and Toronto.