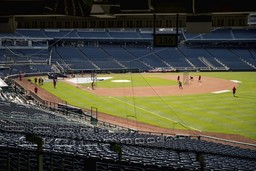 When they resumed workouts Friday at summer training camp in the midst of a global pandemic, the manager's mantra remained. Only, it has a different meaning for the defending champions tiptoeing the health and safety protocols that made baseball feel anything but natural.

"When you see the guys come in after not seeing them for a while, you want to give them a big hug, a fist bump, high-five," Martinez said by video conference from the bowels of Nationals Park. "We're trying to figure out what we can do to emulate some kind of handshake or fist bump or elbow tap or feet tap - whatever. We'll figure something out."

The team that danced itself from a 24-31 start to a championship in 2019 is off to a relatively positive start in 2020. Martinez learned depth catcher Welington Castillo is joining Ryan Zimmerman and Joe Ross in opting out of the season, but he said the 57 players at camp are all good to go.

Ace Max Scherzer threw 65 pitches in his return to the park, fellow right-hander Stephen Strasburg looked sharp and there are plenty of reasons for optimism around the Nationals with a shortened 60-game major league season looming.

"The important thing is we came into spring training 2.0 in good shape," general manager Mike Rizzo said. "We feel that they are much closer to game ready than they would have coming into a normal spring training because of the game plan we had during this absence."

Washington is long past the departure of third baseman Anthony Rendon and is adding 2020 first-round pick Cade Cavalli to its pool of 60 available players. Three weeks remain until opening day against the New York Yankees, and the monumental challenge is trying to be game ready for baseball's version of a 100-yard sprint.

"We're so used to it being a long season and it actually becoming a marathon," Martinez said. "Now, you want to get out of the gate, get out strong, put some wins on the column early. You can't fall behind."

In an effort to start strong, Martinez spaced out workouts from 7:45 a.m. to 5:30 p.m. to allow players to practice in small groups and coaches to use their time at the park wisely. Scherzer and Strasburg threw in the morning, some position players took batting practice and fielded grounders in the 95 degree heat, and all of it came in the shadow of a new "World Champions" sign in center field.

For those in charge of steering a bid to repeat, it felt comforting to be back, even if the new normal feels completely different from October.

"You can't just come in here with a clear mind," Rizzo said. "You have to keep yourself safe and look out for the other guys. You walk in here excited, but also with things on your mind to adhere to the protocol and conduct yourself in a manner that is safe for yourself, your family and your teammates."