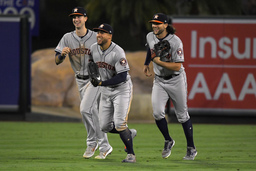 ANAHEIM, Calif. (AP) Will Harris struck out the side with just nine pitches, and then the glowering Houston reliever did something even rarer than an immaculate inning.

"Will never smiles - ever - on the field," Alex Bregman said. "He's always in a bad mood. That was the first time I've ever seen him smile on a baseball field."

The Astros are accomplishing all sorts of unprecedented feats on their way to October, and their latest win left them grinning about the chance for at least one additional playoff game at home.

Bregman hit his 41st homer, Michael Brantley added a three-run shot in the eighth inning and Houston clinched home-field advantage throughout the AL playoffs with a 4-0 victory over the Los Angeles Angels on Friday night.

Rookie Jose Urquidy (2-1) pitched six innings of three-hit ball and Harris threw the sixth immaculate inning in franchise history during the 10th win in 12 games for Houston (105-55), which extended its franchise record for victories.

The AL West champion Astros clinched home field in a potential AL Championship Series against the Yankees (103-57). Houston won four of seven over New York during the regular season to claim the tiebreaker.

"It's really important," Harris said. "We play really well at home, so the less travel, the better. And we get more home games for our fans back in Houston. When you get this late in the season and you're still playing for stuff, it's nice to check boxes off, and we were able to do that again tonight."

Houston will face either Tampa Bay or Oakland, who play Wednesday night in the AL wild-card game, in the Division Series. The Yankees and Minnesota will meet in the other ALDS.

The Astros also stayed one game ahead of the Dodgers, who have clinched the NL's best record. Houston beat Los Angeles in the 2017 World Series to claim its first championship, winning Game 7 on the road.

If the Astros and Dodgers finish with the same regular season record and meet in the World Series again, Houston would host Game 1 by virtue of its superior intradivisional record.

The Angels (72-88) managed just three singles and didn't get a runner to second base in their 11th shutout loss. Los Angeles would have to win its final two games to avoid finishing with the beleaguered franchise's worst record of the 21st century.

Bregman led off the second inning with his ninth homer in September, picking up the 111th RBI of his MVP-caliber season.

The Astros had just one hit between Bregman's shot and the eighth, where Brantley connected for his 22nd homer - his first extra-base hit since Sept. 9 - to deep center with two outs.

Harris struck out Kaleb Cowart, Matt Thaiss and Michael Hermosillo - who helped out by swinging at a probable ball - for the Astros' first immaculate inning since 2004. Houston's dominant right-hander has allowed just two runs in his last 21 appearances.

"I knew I had a pretty good idea where the ball was going," Harris said. "When I struck out the first guy, I felt like I was going to strike out the side. It was kind of weird."

Patrick Sandoval (0-4) finished his rookie season winless for the Angels, but still pitched two-hit ball into the fourth inning while on a 60-pitch count. The 22-year-old Mission Viejo native reached the majors in August as the 29th pitcher used by the Halos this season due to their numerous rotation problems.

"From the first outing, I think I did a pretty good job staying in the moment and letting my stuff play up here," Sandoval said of his rookie season. "I had all the confidence in the world."

Urquidy made his increasingly strong case for a once-unlikely postseason rotation spot with another strong appearance in September.

The Mexican right-hander has allowed just three runs and 10 hits over 18 innings in four appearances this month. Urquidy has outpitched veteran Wade Miley, who once appeared certain to get the spot behind the Astros' big three starters. Manager AJ Hinch has said he won't make his decision on the fourth starter until later.

Bregman went 1 for 3 with a homer and a walk in the home stadium of his top rival for the AL MVP award. Mike Trout is out for the season with a right foot injury, but the two-time winner leads the league in on-base percentage, slugging percentage and WAR, and is tied for the lead in homers (45). Bregman leads in walks, is third in homers and OPS, and has more RBIs than Trout.

Astros: SS Carlos Correa's availability for the AL division series will be determined during workouts next week. He has made only 11 plate appearances since Aug. 19, and he is missing the final week of the regular season to rest his bad back.

Angels: Tommy La Stella went 0 for 4 as the Angels' designated hitter in his first appearance since July 2, when he broke his leg on a foul ball. La Stella was selected for his first All-Star Game appearance shortly before the injury, which ruined the reward for his breakthrough season.