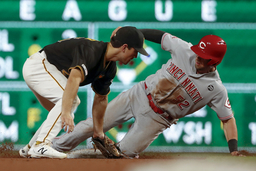 PITTSBURGH (AP) R.J. Alaniz didn't hesitate when asked if he was more excited about getting his first career hit or victory.

"The hit," said the Cincinnati Reds rookie relief pitcher, who hadn't even taken batting practice since his senior of high school 10 years ago. "Definitely the hit. Just see the ball, hit the ball. I was a pretty good hitter back in the day."

Jose Iglesias doubled home the winning run in the 12th inning and scored on Alaniz's single, and the Reds outlasted the Pittsburgh Pirates 4-2 Saturday night.

Iglesias' two-out liner to center snapped a 2-2 tie and came after the Pirates turned a double play. The hit scored Kyle Farmer, who led off with a single against Alex McRae (0-4).

Alaniz (1-0) followed with his hit and pitched two scoreless innings.

Iglesias had three hits and two RBIs for the Reds, and Tucker Barnhart homered.

With one game left in the season, Iglesias is hitting .288 with 11 home runs. The veteran shortstop did not have a job when spring training opened before the Reds signed him to a minor league contract.

The Pirates were held to five hits by seven pitchers and were shut out over the final 10 innings.

"I couldn't have asked anymore from our pitchers, especially on a bullpen day," Reds manager David Bell said. "Our pitching has done a great job all year and our guys might have topped themselves tonight."

"We made some really good pitches when we had to, but overall we needed some offense to show up tonight and we weren't able to do it," Pirates manager Clint Hurdle said.

The Reds tied it at 2 in the fourth when Phillip Ervin led off with a double and scored on Iglesias' single.

Barnhart opened the scoring with a home run to the right field stands in the top of the second. The Pirates pulled ahead 2-1 in the bottom of the inning on a passed ball by Barnhart and Steven Barron's run-scoring double.

The start of the game was delayed because of rain for one hour, five minutes.

Pirates broadcaster Steve Blass was honored in a pregame ceremony as he gets set to end his run of 34 years in the booth Sunday.

Blass has spent a total of 60 years in the organization since being signed as an amateur free agent in 1960 from Falls Village, Connecticut. He pitched 10 seasons for the Pirates from 1964-74 and threw a complete game in Game 7 of the 1971 World Series to beat the Orioles.

The Pirates announced that Blass will be part of the inaugural class next year when they establish a team Hall of Fame.

Most of the Reds players were about an hour late getting to PNC Park as the team bus got caught in football post-game traffic after Pitt defeated Delaware at adjacent Heinz Field.

Police would not permit the bus to pull all the way up to the ballpark. Thus, everyone had to walk the last three blocks.

Reds: RHP Trevor Bauer (illness) has been scratched from his scheduled start Sunday in the season finale.

Pirates: C Barron left the game in the second inning when struck in the face by an errant pickoff throw to second base by Sims. That came right after he notched his first career RBI. ... 3B Colin Moran (strained left hip) missed his fourth straight game and OF Bryan Reynolds (right hamstring discomfort) sat out a third consecutive day. Neither will play in Sunday's series finale.