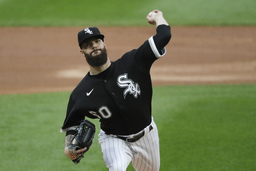 CHICAGO (AP) Dallas Keuchel saw the potential in Adrian Houser when the two were coming up with the Houston Astros. Outings like this were just what he envisioned.

Houser (1-0) simply dazzled in a game where Keuchel (2-1) was about as good for Chicago. The 27-year-old right-hander gave up five hits and struck out five for the win.

Houser started to break through last season when he split time between the rotation and the bullpen. In two starts this year, he has allowed just one run through 12 innings.

"I'm just going out there trying to help out the guys," he said. "When I get off the field, I want to be in a position where the guys can win. Right now we're kind of struggling on the offensive side, but I have no doubt they're going to pick it up and help us out. We've just got to keep rolling."

Mark Mathias singled in his first major league at-bat in the third inning before Eric Sogard drove him in with a base hit, and that was all Milwaukee needed.

Milwaukee held struggling star Christian Yelich out of the lineup, with the 2018 NL MVP and two-time defending NL batting champion mired in a season-opening 3-for-34 slump.

The Brewers stopped Chicago's best streak since a six-game run in April 2017. The White Sox won the previous two nights at Miller Park.

Keuchel struck out eight over seven innings while allowing one run and five hits. The 2015 AL Cy Young Award walked one, but fell to 0-5 in six starts against the Brewers.

"We've been hot," Keuchel said. "Eventually, it's gonna come to an end. But, man, we were right in the ballgame. That's all we can ask for. Game-in, game-out, we know that we're gonna be in those contests. If we can win series, that's a playoff recipe."

Chicago had two on in the sixth after Mendick doubled and Yoan Moncada reached on an infield single. But after hitting a tiebreaking single the previous night, Jose Abreu struck out to end the threat.

David Phelps worked the eighth for Milwaukee. Josh Hader retired all three batters in the ninth for his second save in as many chances.

White Sox: Madrigal is headed to the 10-day injured list and might need offseason surgery, GM Rick Hahn said. Hahn was optimistic Madrigal (separated left shoulder) will return by the end of the month, after the rookie was hurt sliding into third on Tuesday. ... Encarnacion is day to day after leaving Tuesday's game because of inflammation near his left shoulder, in the joint between his collarbone and sternum. ... Hahn said SS Tim Anderson (strained right groin) will begin workouts at the team's auxiliary site on Thursday. ... Hahn is also optimistic LHP Carlos Rodon and RHP Reynaldo Lopez will return from in the next few weeks after being sidelined because of soreness in their pitching shoulders.

RHP Josh Lindblom (0-0 4.91 ERA) starts for Milwaukee with LHP Gio Gonzalez (0-0, 7.36 ERA) getting the ball for Chicago. After two seasons in the Korean Baseball Organization, Lindblom had his first major league start since 2017 cut short because of back spasms when he lasted 3 2/3 innings against Pittsburgh last week. Gonzalez pitched scoreless ball into the fourth against Kansas City in his first start for the White Sox, 16 years after they drafted him.