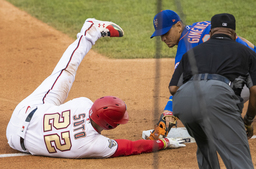 WASHINGTON (AP) Max Scherzer is the type who is going to try to play if he possibly can, even on a tweaked right hamstring that prevents him from driving his lower body into his pitches.

So the three-time Cy Young Award winner gave it a shot Wednesday night for the Washington Nationals against the New York Mets. It was clear right away -- to him and his catcher, pitching coach, manager -- that the usual power and command were missing.

Scherzer exited because of the leg issue after laboring through just one inning, overshadowing Juan Soto's eventful 2020 debut for the World Series champs, and Rick Porcello collected his 150th career win in the New York Mets' 3-1 victory over Washington.

"The best decision," said Scherzer, who needed 27 pitches to get three outs then gave way to Erick Fedde, "was just to get out of the game."

He revealed afterward that he first felt something wrong with the hamstring before his previous start, six days earlier against Toronto. But he pitched anyway in that one and ended up throwing an MLB season-high 112 pitches across 7 1/3 scoreless innings.

The leg acted up again when Scherzer was doing his usual sprinting Tuesday ahead of facing the Mets.

"He said he was good enough to pitch," manager Dave Martinez said. "He went out there and he couldn't really push off. I mean, that's what we noticed."

Scherzer's fastball was in the low 90s and he walked the first hitter, then gave up a single to the second.

Mets DH Dominic Smith - who drove in two runs, including one off Scherzer in the first with a sacrifice fly - spotted replays of the righty grimacing when he came off the mound.

"It goes to show how much of a competitor and no matter how much he was going through, he was going to give it what he did," Smith said. "We were shocked when we saw Fedde warming up in the second."

The good news for Washington, which already has been without World Series MVP Stephen Strasburg this season because of a nerve issue in his throwing hand: Scherzer thinks this is a minor blip he'll quickly put behind him.

"I wasn't going to push past my limit," Scherzer said. "I'm really not concerned about this. I feel like this is going to heal up pretty soon."

Porcello (1-1) called it "an incredible feeling" to get his milestone win, going seven innings, allowing one run and five hits and retiring the last 10 batters he faced.

"He's been working on his changeup and I saw some real good ones. Good cutter, slider, and mixed it well," New York manager Luis Rojas said. "What a great performance."

Luis Guillorme -- starting at second base with Robinson Cano on the injured list -- provided a go-ahead RBI single in the fourth off Fedde (0-1).

Soto went on the COVID-19 IL on opening day after failing a test -- he thinks it was a false positive -- and he put on quite a show Wednesday for the 16 cutouts of his family members positioned in the first few rows of the Nationals Park left-field corner.

Martinez joked that everyone else on his team is going to want to their own personal rooting sections, too.

"He opened up a can of worms," Martinez said. "I'd like to get some of my kids out there."

In Soto's first official at-bat since October, the 21-year-old outfielder had a run-scoring double. He singled his second time up, although he was soon tagged out when he slid off the bag trying to go first-to-third on a teammate's hit.

Soto also came up with a highlight-reel, cap-and-sunglasses-flying, head-first diving catch of a sinking liner off the bat of Andres Gimenez in the second.

But Soto struck out in his last at-bat to end the game, whiffing on a 97 mph high fastball from Seth Lugo, who retired all six batters he faced for his second save in four chances.

Mets: After playing 13 games in 13 days, they get their first off-day of the season Thursday, then open a seven-game homestand Friday. They'll host Miami for three games, Washington for four.

Nationals: After Thursday's fifth day off in a week, they start a three-game series Friday against visiting Baltimore.