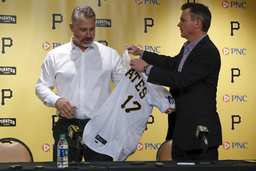 PITTSBURGH (AP) Derek Shelton's garage is clean, the byproduct of the Pittsburgh Pirates' drawn out managerial hiring process, one that took extended after the club fired general manager Neal Huntington in late October.

A 49-year-old baseball lifer who spent last season as the bench coach for the Minnesota Twins, Shelton already had interviewed for the chance to be Clint Hurdle's replacement when Huntington was let go on Oct. 28.

While the search was paused until Huntington's successor was hired, Shelton wandered around his Florida home to burn off the nervous energy. He kept finding himself in the garage, arranging and rearranging in a waiting game that he admits made him "a little bit uncomfortable." Shelton estimated he went through the garage "about 15 times."

Thankfully, there's no need for a 16th. A much larger clean-up project beckons.

Pirates introduced Shelton as the team's 40th manager on Wednesday, tasking him to create a more positive clubhouse culture following a second-half slide that included sloppy play and a series of clashes between players and staff off the field. The self-described former "poor minor league catcher" said his focus will be on making sure players don't settle for thinking they've arrived once they reach the majors.

"Honestly, sometimes guys get to the big leagues, regardless if it's injury, something else has happened and they may not be ready," Shelton said. "I think it's a goal of myself, the staff, my baseball operations group that we're going to have to realize that development is going to have to continue at this level. It's very important, not just from the first day they get here but on through."

Shelton's hiring served as the final piece of leadership overhaul that began when Hurdle was let go on the last day of the regular season in September. Frank Coonelly stepped down as team president a month later and was replaced by Travis Williams, who parted ways with Huntington and hired Ben Cherington on Nov. 15. Cherington immediately started going over the candidates the team had already talked to, and Shelton's name stuck out. The two were around each other in 2017 while they both worked for the Toronto Blue Jays. After getting input from a variety of people, Cherington said all the information "pointed in a very clear direction ... that Derek was the right choice."

The hiring also fulfilled the prophecy of former New York Yankees executive Mark Newman, who convinced Shelton to coach low-level teams in the franchise's minor league system in the early 2000s and predicted Shelton one day would hold the same job in the big leagues. Shelton admits that was always the goal, but he took a circuitous road to get to PNC Park. Rather than focus on managing jobs in the minors, Shelton reached the majors as a hitting coordinator for the Cleveland Indians in 2005 before moving on to roles with the Tampa Bay Rays, Blue Jays and the Minnesota Twins. He spent the last two years as the bench coach for the Twins while letting it be known that he was ready to take the next step.

The next step finally here, Shelton is eager to get going. He'll join Cherington at winter meetings this weekend in San Diego where they will begin addressing a roster that finished 69-93 following a 25-48 swoon after the All-Star break. The freefall included confrontations between at least two players and members of the team's support staff as well as the arrest of All-Star closer Felipe Vazquez on felony charges stemming from an illegal sexual relationship with a minor.

The club could use a hard reset. Shelton, like Cherington, stressed the importance of developing an atmosphere that is "player-centric."

"�t's going to be 100% relationship built," Shelton said. "I'm a person who likes to be out of the office, likes to talk to guys. Likes to talk to them about a bunch of different things. I think that's what myself and my staff will bring."

Shelton welcomed recent comments from center fielder Starling Marte, who hinted he'd be open to a trade. The 31-year-old is perhaps the team's most valuable asset. He has two years remaining on his contract and is coming off a season in which he hit .295 with a career-high 23 home runs.

"We want players that want to win, so the fact that he expressed that he wants to win, I think that's great," Shelton said.

Cherington stressed when he was brought on that Pittsburgh's modest payroll would not be used as an excuse for not winning. He acknowledged that Shelton's time in small markets like Tampa Bay "doesn't hurt" but stressed the bigger drawing card for the Pirates is Shelton's ability to make connection with players. He called the response from players he consulted during the process about Shelton overwhelmingly positive.

Shelton appreciates the kind words but knows they mean nothing if he can't back it up.

"For me to instantly think I'm going to walk in the clubhouse, that because people have said positive things about me that everybody is going to trust me and everybody is going to like me, I realize that's not true," Shelton said. "It's my job and the job of our baseball ops and the coaching staff on a day to day basis that we're building relationships and we're building that trust and we're giving players the opportunity for our voice to be heard."