Fire breaks out at under construction Texas Rangers park 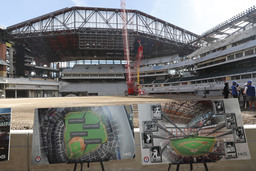 ARLINGTON, Texas (AP) Fire broke out Saturday at the future home of the Texas Rangers, which is under construction in Arlington.

Arlington Fire Department Lt. Mike Joiner said the blaze was brought under control and no injuries were reported. The cause of the fire has not been determined.

Manhattan Construction, the general contractor for the project, said in a statement that the fire began about 2:30 p.m. in the roof area of the stadium. The contractor said an investigation will determine the cause of the blaze.

Rangers spokesman John Blake said the stadium is more than 200 feet (61 meters) tall and the fire was in an area about 100 feet (30 meters) high.

The estimated $1.1 billion Globe Life Field includes a retractable roof and is scheduled to open for the 2020 Major League Baseball season.